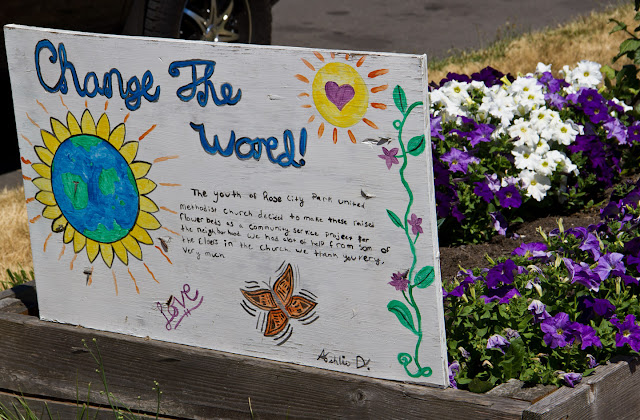 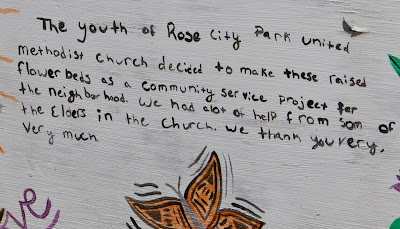 I never wrote about my last day in Portland, after I drove back from Manzanita.

I had an early flight to Seattle the next day so I was staying at the airport Radisson, and I planned to take my time driving back from the coast. I had originally thought I might go to a wildlife preserve up in Washington, but decided I'd rather spend some more time in Portland.

I looked at a map online and found that wherever I drove on the east side of town I was likely to run into SE (or NE) Sandy, and that would take me to NE Airport Way as well. So that's what I did instead. I got off the freeway in downtown, crossed the Willamette, and drove around the east side of Portland looking at things on my way to the airport. Some of it was industrial, some of it was seedy, some of it was quiet neighborhoods with lush front gardens.

I stopped for lunch in a taqueria, I went for a walk along streets full of flowers, I watched birds in a park. I got lost once, when Sandy branched into two streets and I took the wrong one, but I found my way back easily enough. I didn't take many pictures -- mostly I was in the car -- but here are a few.  This charming community service project above, from Ashleigh and her friends, is not something I could have seen from the interstate.