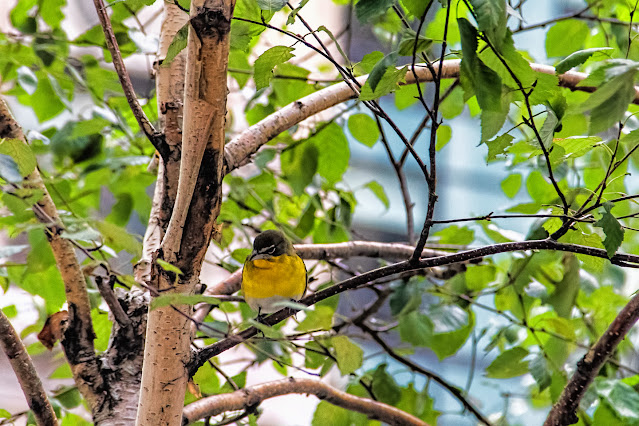 One of the few good things I can say about Twitter is that literally every possible interest on the planet is represented. And so if you happen to be interested in birds that are passing through or hanging out in New York, there are several Twitter feeds that will keep you up to date.

Which is how I became aware that a yellow-breasted chat was frequenting Verizon Plaza, a nondescript corporate park not far from my apartment. Every day I was sure it would be gone, heading south for the winter, and every day there were more pictures on Twitter. I was sure that nothing would inspire the bird to leave town faster than my attempting to see it, but I walked over there yesterday between errands and found a small crowd with long lenses and binoculars surrounding a tree. And there, preening for its adoring audience, was a tiny yellow bird.

Since I was in the middle of shopping I didn't carry a big lens, so the picture isn't great, but it's still an unexpected treat in the middle of Midtown Manhattan.
Posted by Kathleen at 10:36 PM