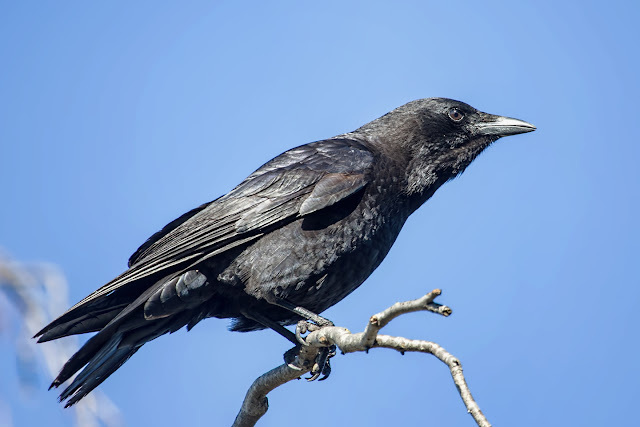 Crow is crow, you say.
What else is there to say?
Drive down any road,

take a train or an airplane
across the world, leave
your old life behind,

die and be born again--
wherever you arrive
they'll be there first,

glossy and rowdy
and indistinguishable.
The deep muscle of the world.

This particular crow was in Albany, but they're everywhere in the East Bay. Crow and raven populations have exploded in the Bay Area in the past few decades -- there's plenty of food and no one shoots them.

I was mostly oblivious to birds when I lived there, but even I couldn't ignore a crow, and I know I never saw a raven. Now there are dozens of crows in every park and the occasional solitary raven, and empty crow's nests in most of the bare trees lining the streets of Pleasanton, waiting to hatch the next generation.