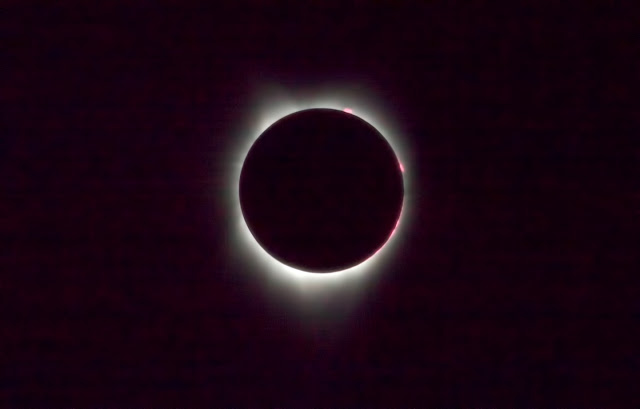 A poor representation, but one that I'm lucky to have at all. During the early stages of the eclipse, when I was shooting through a filter, I had time to fiddle with the shutter times and exposures and get the best possible images. But when totality started, and I took the filter off, I clicked the shutter a couple of times, noticed that I wasn't getting anything, randomly fumbled at the exposure, clicked a couple more times and then forgot about the camera.

Because I didn't care. Up to that point, the eclipse was interesting. Really, really interesting. I looked through my filter and my camera, and saw the sun shrink to a crescent. There were sunspots. It was thrilling.

But when I wasn't staring straight at the eclipse, it didn't have much of an effect until the sun was almost gone. Then the color gradually leaked away from the world around us, and shadows became much sharper and more detailed because the light casting them was coming from a narrower, less diffused, source. Right before totality, it started to get much darker, and much cooler. (Someone had a thermometer, and the temperature dropped almost 15 degrees Fahrenheit.) It became obvious that Something Big was happening.

The sky explodes with light, which doesn't make any sense because it's so dark. You can't really see the corona in this photo, but it swims out around the sun in every direction. The stars come out, along with a few planets paying their tribute to the great glory.

I was laughing and crying at the same time. I had binoculars, and I handed them to a woman near me I didn't know and said, “You have to look at this!” just because I had to have someone else see what I was seeing.

And I got a few pictures after all. I was able to jack up the exposure on the raw files, and see totality and the diamond ring. The red on the right hand side is the chromosphere, visible only during eclipses, and the bumps are prominences, tails of gas extending from the surface of the sun.