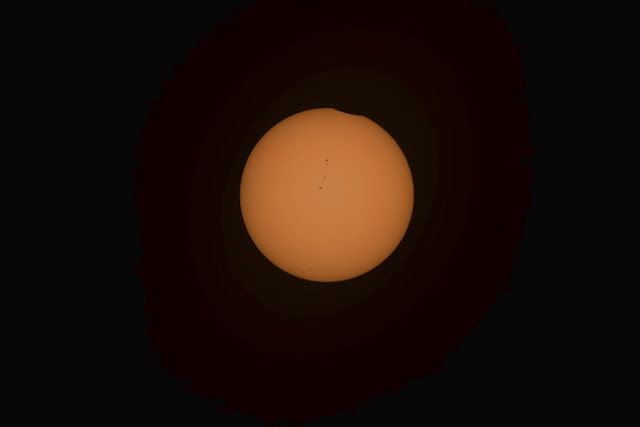 You are a child of the universe,
no less than the trees and the stars;
you have a right to be here.
And whether or not it is clear to you,
no doubt the universe is unfolding as it should.
-- Desiderata, Max Ehrmann

Do people still know the Desiderata? Although it was written in the 1920's, I think of it as a product of the Sixties and Seventies, when it frequently appeared on dorm room walls and a spoken word version was an unlikely hit single in the early 1970's.

But I'm thinking of it today for reasons that aren't exactly transcendental. Shortly after the hit record version of the original poem, National Lampoon released a parody version called Deteriorata, which changed the line to “You are a fluke of the universe.”

And yesterday I got to experience one of the happy side effects of what is truly a fluke of the universe: the solar eclipse. Our sun is 400 times bigger than our moon, but it is also 400 times farther away. So, seen from Earth, the sun and the moon appear to be approximately the same size, and it's that coincidence that makes total eclipses possible. If the moon were much closer, it would block out too much of the sun and we wouldn't see the corona; if it were farther away, you'd have only annular eclipses, where the sun isn't entirely blocked. And since the moon is gradually moving farther away from Earth, over the next several million years total eclipses will become increasingly infrequent, and will eventually stop.

I will write much more about the experience over the next several days, but here's one of the photos I took: shortly after First Contact, when the moon first starts to move over the sun. You can see just the smallest indentation at about the 12:30 mark. The dark spots in the center of the sun's disk are sunspots.