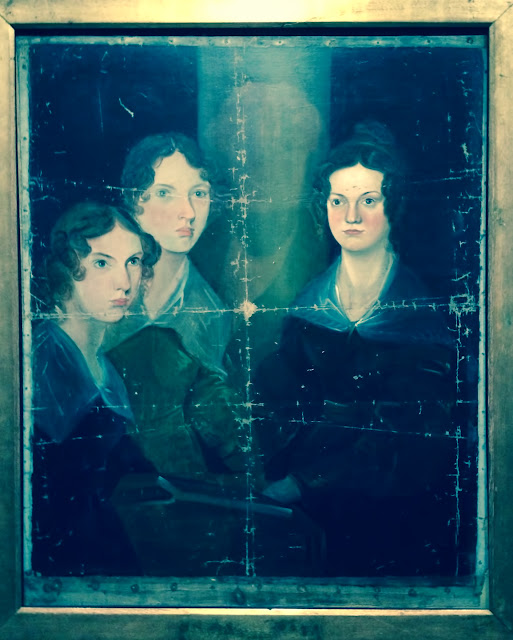 A not-great phone photograph of a not terribly well-executed and very badly maintained oil painting.

But as it's the only recorded likeness of the three Bronte sisters -- that's Anne on the left, Emily in the middle, and Charlotte, by herself, on the right -- it's of great historical importance. It was painted by their wastrel brother Branwell, who was originally part of the group, sitting between Emily and Charlotte. He painted a pillar over his likeness, but because he didn't mix his paints properly they faded and you can now see the ghostly outlines of the figure that was once there.

I saw this painting many years ago at the National Portrait Gallery in London, but it was wonderful to encounter it again at a Charlotte Bronte exhibition at the Morgan Library that I went to a couple of days before I left for Iceland.

It was the frontispiece in my first copy of Jane Eyre, an abridged version our neighbor Fran Owens bought me at the Green Apple bookstore in San Francisco when I was ten or eleven. (I had originally picked out a copy of The Odyssey -- yeah, I was a weird kid -- but Fran refused to buy it, telling me I'd get quite enough of that in high school.) I read that book at least half a dozen times before graduating to an unabridged paperback, and I loved the long introduction with the stories of the famous siblings -- the chilly parsonage, the tragic early deaths, Angria and Gondal -- as much as I loved the actual novel.
Posted by Kathleen at 7:48 AM