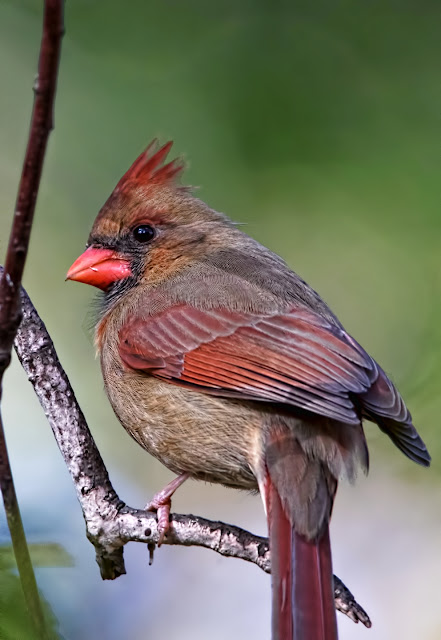 Because I never get tired of cardinals, even in imperfect pictures with twiggy shadows across their eyes.

And because I know everyone is dying to know the latest gossip from my digestive tract, I am as expected getting better, but slowly. Yesterday I thought I might like some fruit salad with my yogurt. There's a market a few blocks away that sells beautiful fruit already cut up, so I went there.

And although I'd been thinking earlier that maybe I could have gone on vacation after all -- really, the actual trip is mostly just sitting, and I could lie down when I got there -- the trip to the market cured me of that illusion. It's only six blocks but it felt like six miles. I had to sit down and rest when I got there, and I had to sit down again after walking back before tackling the steps to my apartment. The idea that I could lift a suitcase or stand in line or deal with crowds was clearly ludicrous.

Obviously I needed more calories if I was going to get my strength back any time before 2017 and fruit wasn't going to cut it. So I also bought peanut butter, some nice squishy bread and fancy French preserves and I had a peanut butter and jelly sandwich with tea. It tasted delicious and I ate the entire thing.

Then I felt sick and couldn't eat anything else the rest of the day, but hey, it's progress.