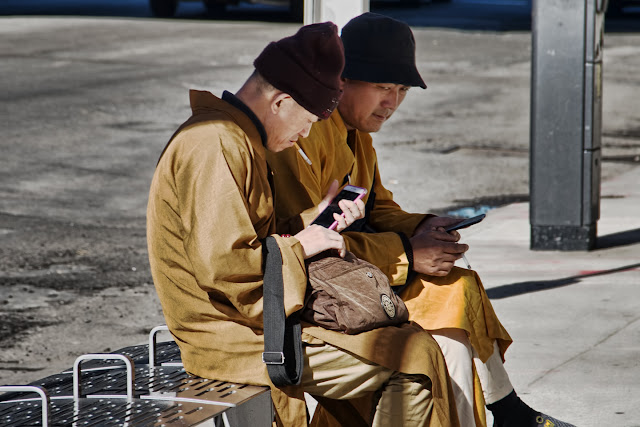 In case the cigarettes and smartphones aren't enough of a clue, these aren't actually Buddhist monks; they're part of a new army of panhandlers that's infested popular tourist areas -- men, and some women, who wear religious robes and ask for money to build a temple in Taiwan. These two were taking a break from harassing strollers on the High Line.

I was downtown early this morning to visit my friends at the Apple store -- they're recalling travel adapter kits because of danger of electric shock. Since I'll be needing one of the potentially deadly adapters shortly, I signed up for an appointment as instructed the day I got the notice.

And of course, it turned out to be not that simple. I wouldn't presume to tell Apple how to conduct their business, but if it were my company, and I were requesting that customers who had purchased a particular product return them to my stores -- and not just wander by whenever it was convenient for them but schedule an appointment in advance -- I would probably make sure that I had the replacements in stock. But that's just me.

Needless to say that wasn't the case, and the adapter that happened to be out of stock was the one I'm most anxious to have -- the one for Australia. It's on order, and I should have it in plenty of time, but still. It was only by an extreme exercise of will power that I didn't head immediately to the nearby Sarabeth's bakery and soothe my frustrations with carbohydrates.