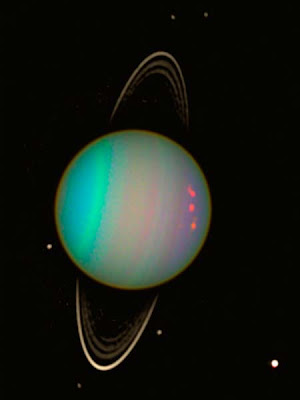 This photo was taken with filters to enhance the detail -- seen in natural light, Uranus, like its sibling Neptune, is a dim blue globe. The angle of the photograph isn't an artistic choice; Uranus actually lies on its side relative to the rest of the solar system, so its axis of rotation is where less imaginative planets have their equators.

The brightness was also enhanced so the rings and satellites can be seen more clearly. Uranus has 27 moons, mostly named for characters in Shakespeare. The bright dot in the lower right is Ariel; the two bright moons closer to the rings are Puck and Portia.