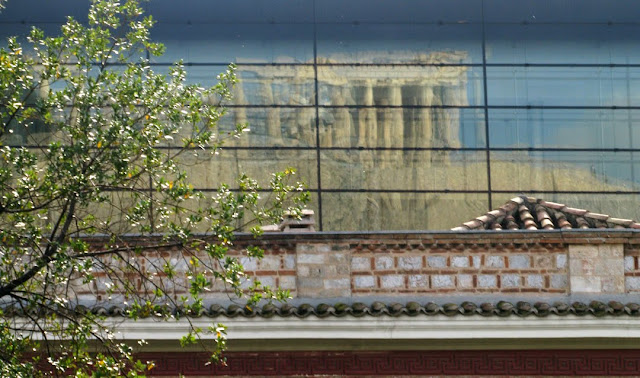 This is the Parthenon reflected in the windows of the new Acropolis museum.

Since this museum was what I most wanted to see in Athens and it wasn't on any of the planned excursions, I went solo for the first time on this cruise. Successfully, despite the best efforts of the Athenian cab drivers, who seem to number a larger than usual number of thieves in their ranks, and the inescapable fact that the ship was going to sail at a certain time whether I was on board or not.

A large sign in the terminal advised tourists what fares they should expect to pay for taxis to various locations. A cab to the Acropolis should be 12 euros, but this was news to all the drivers who offered their services for a mere 30 euros, and who walked away when I said I wouldn't pay it. I finally walked out into Piraeus and hailed a cab on the street, which took me to the museum for 13 euros.

Hours later, after the museum and Hadrian's arch and the Zeus temple and the old Olympic stadium and the Parliament building, I attempted to get a cab back to the ship from Syntagma Square. Every driver refused to take me. One told me that Piraeus was a fixed fare -- 35 euros. I said, "It is not!" and he sneered, "Just see if you can get a taxi here."

I was running out of time but figured I'd try the side streets away from the square before I gave in to highway robbery, and managed to hail a cab, with a very nice driver who used the meter and took me back to the ship -- for 8 euros.

Plus a very big tip.
Posted by Kathleen at 5:26 PM