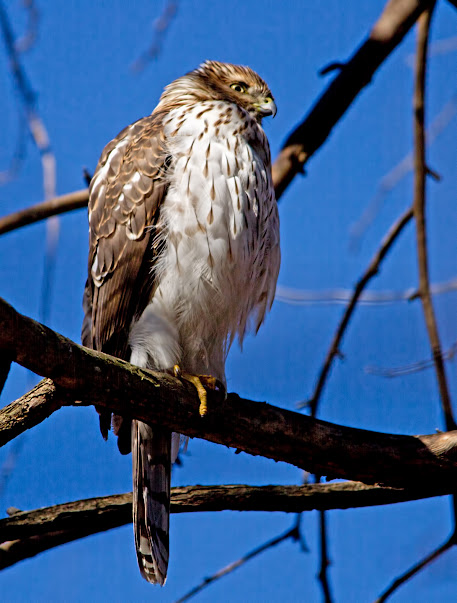 I saw this juvenile Cooper's hawk in 2013, but I'm posting it because I didn't manage to get a picture of the adult Cooper's that landed on my fire escape Monday morning.
It only stayed a few seconds -- long enough for my jaw to drop, but not long enough to get even a phone picture. And since it had a small rodent of some kind (probably a rat) clenched in its talons and I was eating, I wasn't that sorry that it didn't stick around for breakfast.
I have been noticing birds I'd never seen before in the backyard, and have been wondering if it's just that I'm spending more time on my bed looking out the window these days, or if they're expanding their usual territory while we humans are in retreat. But I had never seen a hawk outside the park, and definitely not on my fire escape.
Yesterday I saw an email from the Wild Bird Fund reporting that they planned to release a rehabbed Cooper's hawk in the park this past weekend, and I'm guessing that's the bird that turned up here. Maybe she was a little disoriented, or else she just wanted to treat herself to breakfast downtown after getting out of the hospital.
Posted by Kathleen at 7:30 AM