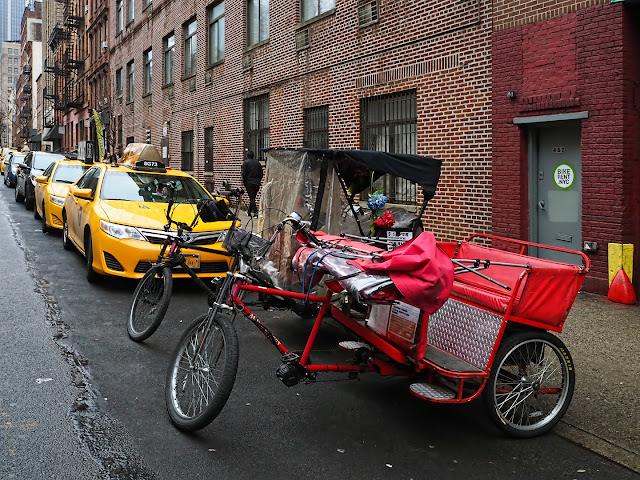 I meant to post this yesterday, but I was working on an art project and meeting a friend for lunch, and just forgot. How time flies when you aren't employed is something that continues to astonish me.

Here are two pedicabs parked on the street next to more traditional cabs. They're for the tourists obviously, but I did ride in one of these years ago when I was leaving a work event late on a bitterly cold, blizzardy night and there were no taxis to be had. I was reasonably warm under the awning and it was surreal to glide so slowly through the snowy streets, behind plastic sheeting like the temporary walls surrounding delis and flower stands in the winter.

I negotiated a cheaper than usual price for the ride before I got in (the usual fare is $5.00 a minute) but it still cost me three times as much as a regular cab, so I will almost certainly never do it again. But I do love that memory, of the snow whipping past, the driver a black shadow with legs pumping, and the empty streets vague and magical through plastic windows.