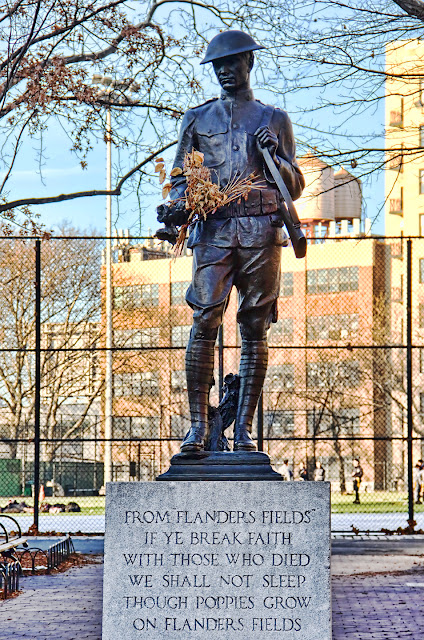 Since we've just passed the 100th anniversary of the U.S. entry into World War I, here's a tribute to one of the Yanks who went Over There, a statue in Dewitt Clinton Park in Manhattan.

What makes it true urban poetry though is that it gets the poetry part wrong -- the inscription from  In Flanders Fields is incorrect. It should be:

If ye break faith with us who die
We shall not sleep, though poppies grow
In Flanders fields

That poem is one of the millions of random facts rattling around in my brain, taking up neurons that could be more productively used in remembering which server I saved those files on and what I need to pick up on the way home from work. When I was in sixth grade, we each had to pick a poem to memorize and recite for the class, and my friend Lizanne chose In Flanders Fields. (I recited a ghastly lyric called The Bridge Builder, and didn't realize that I was mispronouncing the word “chasm” until many years later. Just a couple of weeks ago on Big Little Lies, Reese Witherspoon's character corrected her ex-husband for pronouncing it exactly the way I used to. He was an unattractive character in general, but for a minute there he had my complete sympathy.)

Yes, I can still recite The Bridge Builder. And no, I won't.